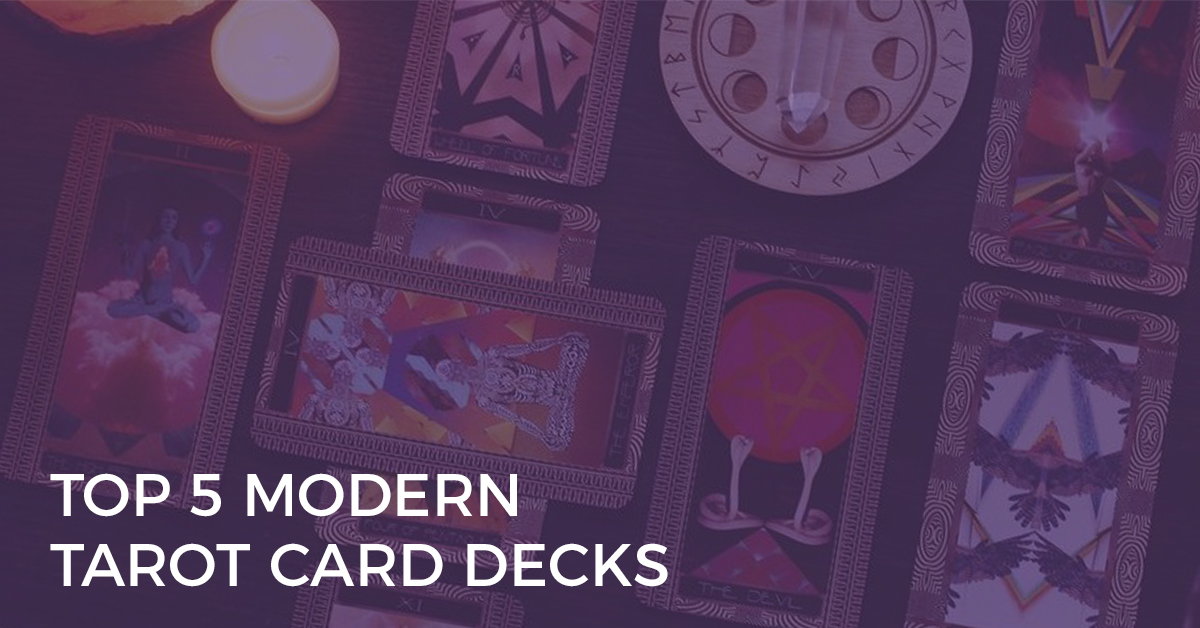 In the past few years, Tarot cards have really hit the mainstream and I couldn’t be more excited!  With the new popularity comes new and exciting modern Tarot decks.  Every day a new Kickstarter campaign is going up for beautiful and powerful deck that's taking Tarot to a whole other level.

These new takes on the traditional Rider Waite (that we all know in love) are making Tarot more approachable to all different people.  How great is that?

Today, I want to share with you the top five Modern Tarot Decks for 2018 (in no particular order) that I can’t stop looking at. Whether you’re just dipping your toe into the Tarot waters or are a seasoned reader and want to spice up your deck, each of them are perfect for today’s modern mystic!

Artist Tina Gong said that the Luminous Spirit deck is meant to radiate outwards.  The inspiration for this unique deck came from how we as humans interact with light.

The backs of the cards are covered holographic foil, which definitely give the deck an ethereal aesthetic.  The fronts of the cards are simple black and grey hand drawn images on a white background. The Magician is represented by a curvaceous and confident woman, who is surrounded by images of the four suits.

But what makes this deck truly modern is the fact that it comes with an accompanying app for your phone.  This 21st century feature provides you with special spreads and spells for the moon phases.  How cool is that?

I mentioned this in last year’s list and it still holds true.  The Wild Unknown Tarot seems to be everywhere on Instagram and for good reason.  The imagery depicts wildlife in black, white, and bright colours.

Temperance is represented by a heron and the Magician is embodied by a spry leopard.  This modern Tarot card deck is great if you feel a special connection to the animal kingdom or just really dig great artwork.

The Wild Unknown is really bringing Tarot into the mainstream, which is something I can definitely get behind.  It’s become so popular that you can get a deck at your local Urban Outfitters! Much respect to the deck's creator, Kim Krans.

The Serpent Fire Tarot follows the divine feminine as she makes her way through the desert.  Each card truly is an artistic experience.  If you look closely, you’ll see the symbolism found in Traditional decks, but the Serpent Fire Tarot is absolutely unique, which is one of the reasons I love it.  It combines Art Deco, tribal style, and psychedelic imagery. Pretty cool, right?

I could stare at these bright and vibrant cards for hours.  The High Priestess is represented by a blue woman, who serenely levitates in the lotus position, while something erupts within her chest.

Inspired by Ancient Egyptian folklore, artist Artist Devany Wolfe hopes that people will use the Serpent Fire Tarot to interpret their dreams and experiences. If you’re on a vision quest, then this is the deck for you.

This modern Tarot card deck is incredible! According to the creator Fontaine Felisha Foxworth, the Brown Girl Tarot Card Deck is the first of its kind.  Featuring the traditional 78 cards with the Major and Minor Arcanas, each card is a stunning photograph of women of color.

Foxworth says that this deck represents a melanated woman on her journey toward integrating her higher self.  The Strength card depicts a powerful and feminine ballerina draped in a ferocious fur coat, she stands en pointe surrounded by flowers.

It’s so refreshing to see an inclusive and empowering take on traditional Tarot.  The Black Girl Tarot Card Deck echos much of the imagery found in the Rider Waite deck but puts a “modern brown girl spin” on it.

Black and white modern Tarot decks are very in right now, as are square shaped Tarot cards.  The Dark Days Tarot deck combines both!  Wren McMurdo, the designer and illustrator, says that this ethereal feminine deck was inspired by the dark side of the moon.  The striking imagery conjures up visions of dream worlds and the unknown.

The creators of the deck hope that the Dark Days Tarot will help readers find a deeper understanding and inspiration to move forward.  They believe that the deck will help you uncover the things that you need or want, even if they’re harder to see.

Inspired by the dark side of the moon, it makes sense that the artwork of the Dark Days Tarot draws a lot of inspiration from lunar archetypes.  You’ll also find that the cards feature a stunning cast of diverse women. For example, the Devil is represented by a cloaked woman who is surrounded by many small fires.  She holds a mask outward for our inspection.

Looking for a Tarot Card Deck?

If you’re trying to decide on your first Tarot deck, check out our blog post 9 Sure-Fire Ways to Select a Tarot Deck That’s Right for You!