What Every Tarot Reader Needs to Know About Oracle Cards

I am so thrilled to introduce Tori Hartman to the Biddy Tarot community. Some of you may already know Tori as she is the Creator of the Chakra Wisdom Oracle cards – a beautiful oracle deck that is connected with the chakra system. Today, she writes about how Tarot readers can use the oracle cards for crystal clear readings. Over to you, Tori…

As a professional psychic, in my own practice, I've been working with tarot cards for over 25 years. When I had a near-death experience in my early 20s and Angels visited and recited what I thought at the time were silly fables, I never dreamed that it would ultimately lead me to creating the Chakra Wisdom Oracle cards. (Much of my background you can easily find online).

What I'd like to share with you is how I see the amazing growth available through mastering your intuitive energy through cards – whether they be tarot or Oracle.

The first thing I like to say is I find that Tarot is uniquely designed for divination, the Major Arcana representing major life changes and is akin to seeing a flashing red light in your rearview mirror: it's a good idea to stop and take notice.

The Minor Arcana offers us more day-to-day details, and it's worth noting that our modern playing deck was borrowed from the four suits in the minor Arcana. Notice I said minor deck? Because there are two decks within the tarot, and you'll notice that in the modern playing cards there is no Page card. He is the messenger, and as a result he has been taken away from a deck that would be used for card games.

So I bring your attention to the idea that when the Page card shows up there is a message being delivered – that is related to the divinatory message of a reading. And one of the many reasons I love Tarot is the two decks mingle to tell you a story.

Since we look at the Major Arcana as the Fools journey then when we pull one of these cards out of the story (when I referred a story I'm talking about the reading that is being presented in your layout), it tells us where we are picking up in the Querent’s journey.

Now imagine taking one of the Minor Arcana cards and placing it around a major card. What the cards are doing is revealing to you, the reader, where this person is in the path of their emotional journey of the Fool.

Therefore the major cards will reveal major decisions and perhaps open up where your Querent’s turning point is.

What I discovered in my journey was that Oracle cards are about breaking patterns. They often reveal to us our path to manifesting. They are what I like to refer to as a secret set of tools that will only work in the right conditions.

What are the right conditions? You must vibrate energetically with the medicine of the Angels that brought that deck forward. Oracle decks in themselves can use animals, angels, trees, gods or goddesses or chakra and each is completely different from the other.

Unlike tarot, where you can have many renditions – or “remakes” as we say in Hollywood – but the structure will always be the same. You will always see 78 cards in a tarot deck. Whereas Oracle decks can have any amount of cards.

So what is the difference?

I believe that Oracle Cards are there to teach us the tools for living, put us in harmony with ourselves, and offer us new ways of being in our life. For example in the Chakra Wisdom Oracle Cards, your chakras themselves are the basis to reveal your own internal wisdom and answers.

I recently wrote an article on chakra evolution. In it, I referred to how our energy centers hold all of our answers and all we need do is tap into it. Many of you already know this as your work with cards, in general, is about this!

For example the Red Chakra cards will always reveal what you are sourcing your energy from. They will show you the foundation on which you stand. The Orange or Second Chakra Cards will tap into how your feelings are guiding you or hindering you. The Yellow or Third Chakra cards reveal your thought or planning process, while the Green or Fourth Chakra cards reveal the truth of your heart – is your heart in something, or not?

Once we move to the upper three chakra, the Blue or Fifth Chakra cards reveal your manifesting ability. This is a departure in that this deck was created to set intentions and to show you the path through your own internal wisdom map – in this case Chakra.

Therefore if we only really manifest what we are communicating and asking for, and that is what our fifth chakra represents, the Blue cards will reveal that to you.

The next thing I discovered was that the Sixth Chakra represents our intuitive Sixth Sense, our Third Eye region. Our hidden family agreements are often revealed in these cards. And finally the Neutral or Seventh chakra cards, reveals that the universe is neutral and open to supporting you in creating your desire.

However, we can never create with our Seventh chakra. These cards will only reveal to you the highest thought that you must undertake in your path. But people who try to live in their seventh chakra of higher consciousness, rarely live long lives: Marilyn Monroe, James Dean, Jimi Hendrix – I could rattle off many more. The point is that we only really can create when we have a solid first chakra.

Now, what does that mean to you with the Chakra Wisdom Oracle Card deck? What can this deck or any Oracle deck really reveal to you? An Oracle deck reveals the internal journey you must take to create your desires externally. Therefore they will illustrate to you how your internal reality is reflecting your external reality.

So how can Tarot exist side-by-side with an Oracle deck?

Here's how I do it: once I know where someone is through a Tarot reading, I can then show them the path to create what they are looking to create with Oracle Cards.

I love the idea that not only can I show someone where the pond with all the fish is located, but also now I have a way to show them how to make internal shifts to get there. One of the things I really love to see is how the tools in my deck offer people a skill set to live intuitively.

Remember a deck will only work for you if it speaks to you. There is a reason that there are hundreds of thousands of tarot decks. There is also a profound purpose for an Oracle deck.

My disclaimer: No tarot or oracle decks were harmed in the writing of this article.

Spread the Love to Your Favorite Peeps 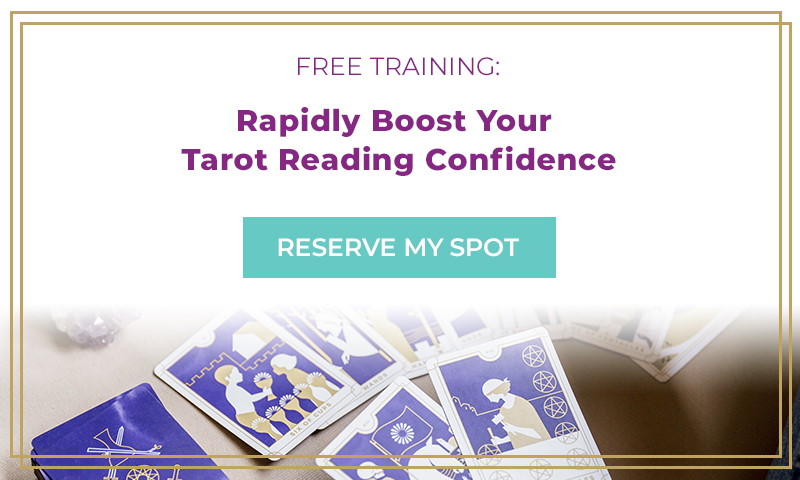