Is the Tarot Evil and the Work of the Devil? 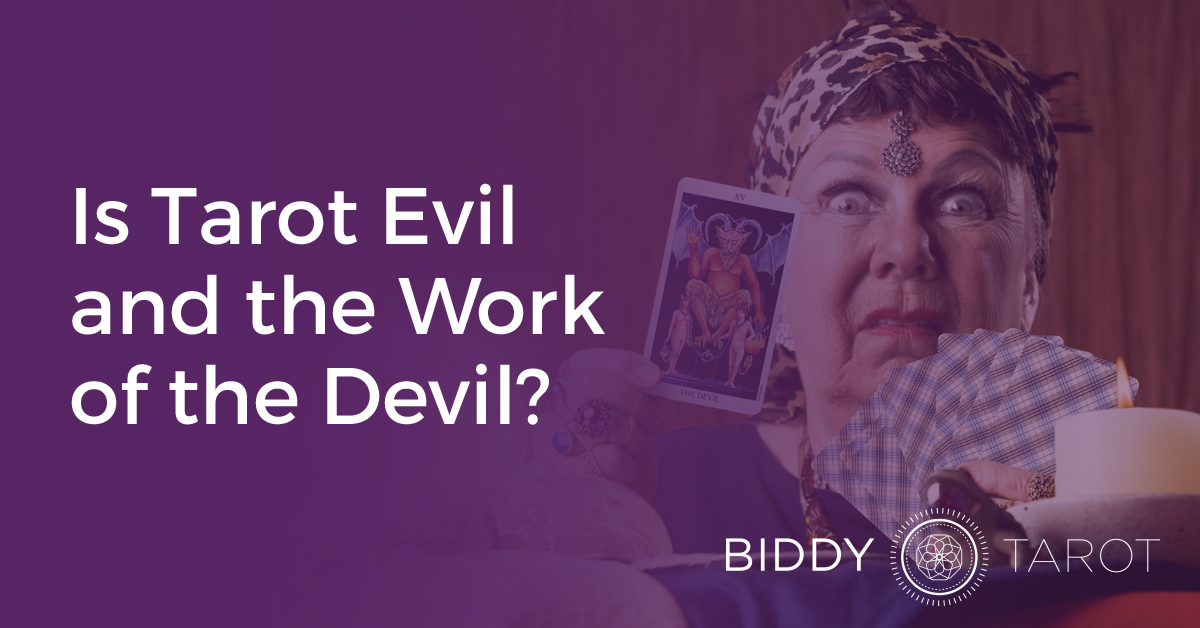 Is Tarot evil and the work the of the Devil?

Sadly, there is a big misperception out there that Tarot is evil, it’s the work of the Devil, we’re all worshipping Satan, etc etc etc…

Often, this is a result of what we’re hearing in media, and a lot of religious beliefs are very anti-Tarot and do believe that Tarot is evil. So, in this video, I want to debunk that myth and show you how Tarot can actually be a beautiful, soulful and divine tool to help you in your journey towards your greater intuition, greater inner wisdom and all of those beautiful, good things.

Is the Tarot Evil and the Work of the Devil?

IS TAROT EVIL AND THE WORK THE OF THE DEVIL?

Sadly, there is a big misperception out there that Tarot is evil, it’s the work of the Devil, we’re all worshipping Satan when we look at the cards, it makes bad things happen, and maybe it even brings evil spirits into play.

Now, often, this is a result of what we’re hearing in media, and a lot of religious beliefs are very anti-Tarot and do believe that Tarot is evil. So, in this video, I want to debunk that myth and show you how Tarot can actually be a beautiful, soulful and divine tool to help you in your journey towards your greater intuition, greater inner wisdom and all of those beautiful, good things.

WHERE DOES THIS IDEA COME FROM?

Let’s have a chat first about where this whole idea comes from about Tarot being evil. Mostly, it’s from media and religious beliefs.

If you do a Google search in Google News and enter “Tarot,” unfortunately, you find a lot of news posts about the psychic Tarot reader who scammed this poor lady out of $500,000 because she told her that she had a hex, and she could only remove it if she was paid $1,000 at a time. They’re awful stories, but what they also do is they portray Tarot and people who read Tarot in a really negative way, and we know that not everyone is a scammer! It’s awful. In fact, the scammers make up a very tiny percentage of all people who read Tarot.

Now, the other place that media often comes into with Tarot is film. Think about movies where you’ve seen Tarot cards or even in TV series. Often, Tarot cards are presented in a way that you’ve got this mysterious woman sitting at this little round table with her crystal ball and her Tarot cards laid out. She flips over the Death card, and then suddenly, the other person falls dead, and it’s all chaos, right?

We start to get this crazy belief that Tarot can make things happen and that it has this insane power to do things. Even sometimes in those movies, we might see the Tarot cards out with the Ouija board, and suddenly, there’s an evil spirit in the room, and everything goes into chaos. There are plates being thrown around the room, and it’s just crazy things, and the Tarot cards are there in that scene as well.

So, it’s no wonder we have this misperception that Tarot is evil and does bad things!

Now, when it comes to religious beliefs, it’s a similar story, but it’s often around this idea that Tarot is sinful. Tarot cards are often associated with divination. They’re not necessarily always about divination, but in the Bible, what it says in Leviticus: “Do not practice divination or seek omens.”

So, I get it. I get that if you have strong Christian beliefs, and you read the Bible, and you read this line, and you think, “OK, I’m not going to do divination, and Tarot cards are part of that.” I get why people may be thinking that Tarot is sort of bunched in with that evil group, right?

But here’s the thing:

When we talk about divination, particularly in the Biblical sense, it has a lot to do with fortune telling and unlocking the secrets of the future by occult, supernatural means. That’s the definition of divination. When it comes to omens, it’s an event regarded as either good or evil—very black and white. This concept of predicting the future is sinful because what it’s doing is asserting a power that’s greater than God’s.

I get it. I get why that might feel out of alignment, particularly if you have strong religious beliefs.

Now, on a more spiritual level, if we were to look at it more sort of metaphorically, what it’s about is that you're ignoring the present, which is where you can make the biggest changes, and instead, you’re thinking more about the future, and you're living outside of yourself, right?

A lot of these religious beliefs that Tarot is evil comes from a place that assumes that Tarot is purely about asserting a power greater than God’s and also predicting the future and keeping your mind in the future.

I want to talk now about what Tarot is. If it’s not that, what is it? And what makes it not evil?

Here’s the thing with Tarot: Sure, we can use it to predict the future. Do I like to do that? Not so much, and here’s why:

If we’re constantly predicting the future, we’re in a place where we believe that it’s completely outside of our power. If I were to tell you, “You're going to buy a house in June, and your relationship is going to be on the rocks by August,” how do you feel? You feel completely powerless, and that’s why I believe that using Tarot purely for fortune telling and predicting isn’t necessarily the best use.

When we want to have this beautiful, good connection with the Tarot cards, it comes from when we’re using Tarot to connect with our inner wisdom and understand more about ourselves and our present situation so that we can make the right changes to create the future that we want.

Where Tarot becomes pure and good in my belief is where we start to use it more in the present versus the future.

That’s why I really fundamentally believe that Tarot is not evil because when we’re using it for understanding more of ourselves, we’re empowering ourselves, we’re connecting to our inner selves, where there is purity and universal energy, and I cannot for the life of me see what is evil about that.

If you’ve ever been worried yourself about using the Tarot cards and thinking, “Oh my goodness, am I playing with something that’s really evil that might bring about bad spirits?” my answer to you is:

No, Tarot is a beautiful tool, and it’s up to you how to use that tool, but I want you to know that there are some very special, beautiful, soulful, divine ways of using this tool for good—and that is keeping in the present, using it to connect to your inner wisdom, and using it to empower yourself to make the right decisions in your life.

There you have it. I hope that today’s video has been helpful for you. Maybe, just maybe it’s relieved a little bit of pressure or doubt that you might have had about using the Tarot cards. I hope it’s had that impact for you.

And, of course, if you want to learn more, come on over to BiddyTarot.com, where you’ll learn how to use Tarot in a beautiful and gorgeous way.