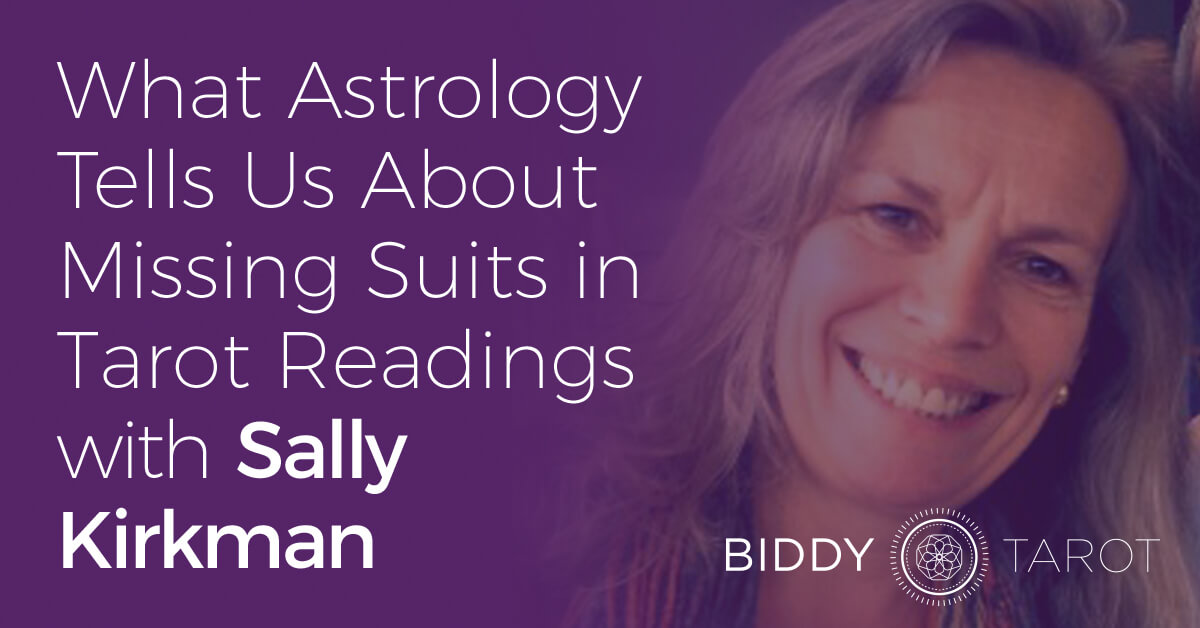 Today, I welcome astrologer, Sally Kirkman, who gives us some wonderful insight into how we can effortlessly use astrology to delve deeper into our Tarot readings. Specifically, she talks about how to use the elements in astrology to determine what it means when a Suit is missing from a Tarot reading. It is my absolute pleasure to be able to share Sally's down-to-earth style with you. Over to you, Sally!

I am an astrologer first and foremost but I have also studied the Tarot and enjoy doing readings for friends and family. Sometimes I use the Tarot cards in an astrology consultation with a client, either if the symbolism of the astrology is contradictory or to confirm a prediction, and the Tarot often acts as a secondary testament for what’s already been revealed.

I started wondering about ‘missing’ suits in the Tarot and how they might be helpful after doing a Tarot reading for a good friend. In the Celtic Cross spread, there were no cards from the suit of pentacles and as she knows a little about the Tarot herself, she made a joke about this and laughed that she wasn’t going to win the lottery anytime soon.

Digging a little deeper it turned out that her current boyfriend was a Capricorn, one of the earth signs associated with money. In astrology, earth types are typically hard workers and her boyfriend was a successful business man. She admitted she was relying on him to provide for both of them and it turned out that one of the things bothering her was her inability to earn good money.

Through the reading she discovered that she wasn’t valuing herself highly and she’d lost sight of the skills needed to provide for herself. It turned out that what was most useful for her within this particular Tarot reading came about because of something that was ‘missing’ or unseen.

This got me thinking about how a ‘missing’ suit in a Tarot reading might be helpful to the reader and therefore the client, especially as I find that working with missing elements in an astrology consultation can be tremendously useful. In fact, working with the elements in astrology often resonates on a very simple and yet profound level with clients.

In astrology, to find out if an element is missing in a chart, I look at the signs of the seven traditional planetary bodies (the Sun, Moon, Mercury, Venus, Mars, Jupiter, Saturn) plus the Ascendant. It’s quite common to have an element missing, two elements missing are less common but not unusual and often there’s a strong emphasis on two of the four elements.

Working with this basic knowledge is surprisingly helpful. Recently I was working with a client who had no earth signs in her chart and the dominant elements in her chart were fire and water. She was full of creative ideas (fire) that she became very passionate about (water) but if she didn’t engage other people in the project (air), she would get bored and quickly move on to the next thing (fire). She admitted that if she didn’t finish something straightaway, it would invariably get dropped. In the past, she had even left jobs before they became profitable (earth), i.e. just before she was about to be promoted.

Talking about the missing element of earth helped her realise that in her own business she needed to either learn to finish a project or get someone else on board who was good with detail and could deal with the more mundane side of her work.

In a general reading such as the Celtic Cross spread, you will often find that one of the suits of the Minor Arcana does not appear. Don’t forget as well that there may be other factors which compensate for a missing element or suit, e.g. in an astrology reading, a client may have no planetary bodies in fire signs but they have a strong Mars, the action planet, which adds vitality and get-up-and-go.

Here’s what to look out for when an element (or suit) is ‘missing’, what that might mean, and how to approach this with your client or with regard to your own birth chart.

Fire is the spark waiting to ignite. It’s motivation, enthusiasm and energy. When fire is missing, there be may times when you feel as if you’ve lost your get-up-and-go and your lust for life so you need to ensure that the activities you engage in help you rediscover your passion. This includes physical energy and running or taking part in aerobic sport. Hot yoga is clearly a fire activity and a session sweating in the heat will have you literally jumping for joy.

Fire urges you to start things so don’t give yourself time or space to talk yourself out of things or be too logical about what or why. Instead make that phone call, send that email and get the energy moving again. It doesn’t matter if you’re successful in everything you do, not by a long shot, but what matters is that you practise taking the initiative.

Fire is creativity and play and if a client has forgotten how to playful in life, help them find ways to rediscover their ‘inner child’, to laugh and take part in fun activities. Being around children will also bring out your own child-like qualities.

This is one of the easiest missing elements to work with for me as it’s the missing element in my own chart, although I do have a strong Saturn, the planet of discipline and commitment, which helps balance out the lack of earth. The element of earth represents security, groundedness, the ability to plan ahead and see things through to completion. When you have strong earth in your chart, you’re a plodder, and like the tortoise in Aesop’s fable, you know instinctively that ‘slow and steady’ wins the race.

With no earth in my chart, I often find I lack the patience to attend to the more mundane, everyday side of life and yet I know I benefit from a slower pace of life. When I’m running on empty or feel unsure about something, it’s by literally stopping and taking part in earthy activities that I ground myself. Here are some things to try:  walking in the countryside, going barefoot, gardening, cooking, massage (giving or receiving), sculpture or art, doing your accounts on a regular basis.

Air is the realm of the mind, the ability to think things through, to be logical, to learn and to share your knowledge with others. If air is missing, it might help to literally go outside and be in the fresh air, especially if you work in a stuffy or claustrophobic atmosphere. Get back out into the world, make friends or find people of like minds to inspire you and make life fun. Air is social interaction, it’s networking and group activities so join in and enjoy the camaraderie of others.

Learn to be logical, write down a list of pros and cons to help you make decisions, work out strategies to help you think things through, set yourself a reading target or challenge your brain and do crosswords and brain teasers or join a quiz team. Get into the habit of asking other people ‘what do you think?’ and hone your listening skills.

When clients lack air in their charts, they may have lost the ability to be objective and have become apathetic or bored. Air is one of the ‘extrovert’ elements as is fire so talk, interaction, chatter and activities which stimulate learning are favoured. Even provoking an argument may help you feel more engaged with others.

This is one of the trickiest missing elements to talk about in a consultation as saying ‘you lack feelings’ is not going to be received well at all. Delve a little deeper into the world of water and you realise that this is about going with the flow in life, trusting your intuition and not rushing and yes, there may also be an issue around an inability to access one’s own feelings.

Like earth, water is one of the slower, ‘introvert’ elements so anything that taps you into your soul can benefit you. Being by the sea is a classic and who doesn’t love sitting and looking and listening at the waves, allowing your thoughts and feelings to come and go like the tides of the sea.

The subconscious is water’s realm so focus on enhancing your ability to notice your dreams e.g. keep a notebook and pen by the side of your bed or prepare yourself for the world of sleep and be restful in the hours before bedtime. Take a warm bath and imbibe a warm drink (water rules liquids), listen to soothing music and create a soft mood, preferably with candle light.

It’s also important to allow yourself to indulge in daydreaming and the saying ‘time you enjoy wasting is not wasted time’ may be helpful for clients with a lack of water in their charts.

Additional aspects to take into consideration

It’s amazing how often people compensate for the missing element in their charts and this can be used effectively in Tarot too. So for example if a client has the element water missing in their chart, I would ask whether they’re attracted to water sign people, i.e. those people whose Sun signs are Cancer, Scorpio or Pisces. You’ll often find this is the case.

Same goes for business partnerships – we often attract the person who represents the element that we lack. This makes sense if you think about it as good working relationships often include people who complement each other. You’re instinctively drawn to people who can offer the skills that you’re lacking whilst you bring your own set of qualities and talents to the table.

The other way that I love to work with missing elements is to find out the different careers or natural abilities that people are drawn towards. One of my favourite charts was of a client who had a predominance of earth and fire signs. As you can imagine, she came across very brusque and efficient and was someone who’d achieved a lot in life. She’d also had two major careers in her life, the first was as an Olympic swimmer (water) and the second was as a training consultant (air). The two elements that she lacked in her chart were where she’d put her energy (fire) and commitment (earth)

The missing element will often emerge in a person’s life in some shape, form or other. So when a suit is missing in a reading ask yourself or your client why that might be and whether they see it playing out elsewhere in their lives. This is about considering what’s unseen as well as seen. It’s looking beneath the surface of a reading for insight. The dominance of a suit tells you one thing but can you also learn something new from a missing suit?