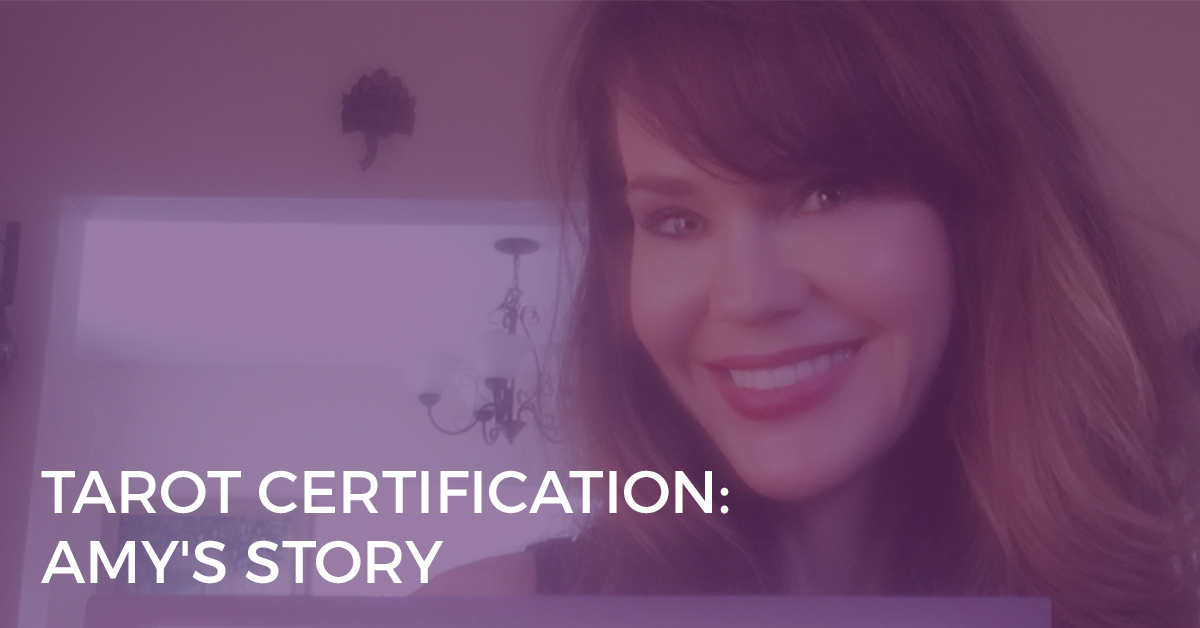 Congratulations to Amy Lucas, one of our Certified Biddy Tarot Advisors! Amy is an actress, writer and Tarot reader in Los Angeles who recently decided to take her Tarot business to the next level. Read on to learn more about Amy and her journey toward Tarot certification.

Amy Lucas first stumbled upon the Tarot over a decade ago during a personal crisis. It was a familiar story and one that many can relate to – she had just ended a tumultuous relationship and was heartbroken. She found the Labyrinth Tarot Deck by Luis Royo at a bookstore and so her love affair with the Tarot began.

Amy started reading Tarot professionally eight years ago – first with family and friends, and then at spiritual bookstores in her neighborhood. But she has primarily made her living as an actress and writer. Reading Tarot was just for fun on the side.

Then last year, she completed the Urban Priestess training, which is a year-long deep dive into the Divine Feminine. She took lessons on ritual, herbs, astrology, shadow work, candle magic, Tarot, and more. She describes it as a journey toward “becoming a more fully embodied person.”

And the end of the year-long program, she was left wanting to go deeper into the spiritual realm. Then she had a reading with famed astrologer Debra Silverman. Debra told her that her life purpose was to “wake up the world.” She was meant to take everything she had learned and share it with other women – to become a bigger force for women in the world.

With her Priestess training and her experience in Tarot, she felt more empowered to expand her presence in her Spiritual business – which led her to the Biddy Tarot Certification Program.

As an initiated Priestess, Amy trusts her intuition to help her make decisions. “If this is my path, it will continue to open up for me. If nothing opens up, then it’s a sign that it’s not meant to be,” she said.

Amy discovered the Biddy Tarot Certification Program right at the end her of Urban Priestess training and she had the instinct that it was the next logical step in her path.

Amy recently launched her website TransformindTarot.com, and is using everything she learned during the Biddy Tarot Certification Program to provide her Spiritual services online.

Amy shares the same passion I do for bringing Tarot into the mainstream. “The average person is wary of Tarot and Tarot readers already, so I’ve found that having the Biddy Tarot credential helps set peoples’ minds at ease,” she said.

Amy used the same approach when building her brand and website. Crystal balls, dark colors, and skulls & crossbones certainly have a place. But Amy wanted to make her brand lighter and more inviting, as to be more appealing to the “Average Joe.”

According to Amy, her Priestess training sets her apart. “I love to craft customized rituals for my clients according to their readings. For instance, if you’ve asked about your love life and we see some potential suitors in the future, I will come up with a really juicy love ritual for you to perform to help manifest all that romance headed your way!”

Amy wholeheartedly recommends that aspiring Tarotpreneurs pursue certification. “Having the Biddy Tarot Certification makes me much more confident,” she says.

She also recommends starting by setting up your website & offerings – and then being judicious about which marketing avenues you will pursue. For example, Amy does an email newsletter twice a month – one reading for the full moon and one for the new moon. She is also on Twitter and Instagram.

“That’s all I could handle. It takes a lot to build a social media presence – everything is so saturated and you have to be committed. Consistency is more important than anything else.”

Her best piece of advice? Ask yourself “what can I commit to realistically?” to avoid burnout.

I can proudly recommend Amy as a Tarot reader. You can learn more about her or get a reading by visiting TransformindTarot.com or by following her on Instagram at @pixiepriestess.

If you’d like to get a reading with Amy, use the code TAKE10OFF for 10% off of any readings on her website.

Is Tarot Certification Right for You?

The Biddy Tarot Certification Program offers a complete approach to Tarot that quickly develops your competence and skill. Our one-of-a-kind certification goes beyond other Tarot books and programs.

While you’re learning, you’ll give real life Tarot readings for all kinds of people… and while you’re giving Tarot readings, you’ll learn things about Tarot that can’t be learned through study alone.

So by the time you apply for certification, not only will you possess a deep and practical understanding of the stories, symbols, and systems in the Tarot deck… you’ll also have the real world tools and skills to read accurately for anyone, anytime.

Learn More About What Tarot Certification Can Do for You

Transform Your Tarot Readings in Minutes