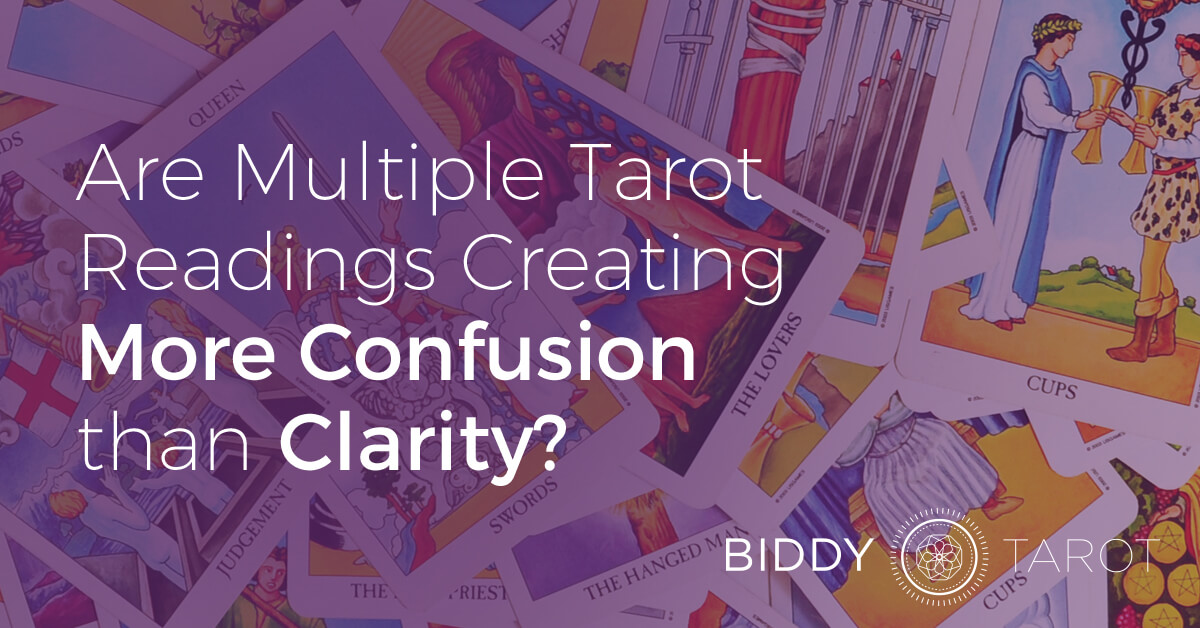 Let’s face it. Most of us have probably consulted the Tarot cards over and over on the same topic, hoping that we’ll get the answer we want or that we’ll be blessed with some sort of profound insight.

Certainly, when reading Tarot for yourself, doing multiple Tarot readings is a common mistake. And many people also fall into the trap of ‘shopping around’ with other Tarot readers, to see what each reader has to say on a particular topic.

The trouble is that we often end up with what seem like mixed messages from the Tarot cards and confusion about which Tarot reading to follow.

So, what happens when you end up with multiple Tarot readings and multiple messages from the Tarot cards? Which Tarot reading do you listen to? Who is right? How do you know what to do next?

Nicole wrote to me a few weeks ago to ask for advice. Here’s what she wrote:

“A while ago, I had a Tarot reading done.  The cards I got were consistent with what I had done at home. I then had a reading done about the same issue over the Internet.  This reader used reversals (I don't).  Anyway, the reading wasn't really parallel to what I was getting at home.

“My question is, which information should I trust?  The Tarot reading that I did myself, where I personally shuffle at home, or the reader's?  It is hard enough because I don't use reversed Tarot cards, so how do I trust and compare? I could get three different Tarot readers, and maybe all three would be different!”

In some ways, it reminds me a bit of when you jump in the car and you're about to drive somewhere you've never been before. Do you go based on your own instinct of where the place is, do you use Google maps, do you use the in-car navigation system, or do you look up the street directory? If you did all four, you'd probably get four different routes to take. How do you know which is the right route??

The thing is, all four routes will get you to the one place. You might go about it in a different way and one route might take longer or shorter than the other, but you'll still get there in the end. So, what does it really matter which one you choose, so long as you choose one, right?

What's more, you could end up confusing yourself to no end if you keep switching between one route and the other. My husband does this. He follows Google maps on his iPhone, then halfway thinks he knows a better way, and then the car navigator is telling him to turn around and go down another road. By the end of it, he's wasted a lot of time and energy on switching between routes, when really, he should have just chosen one and stuck with it. 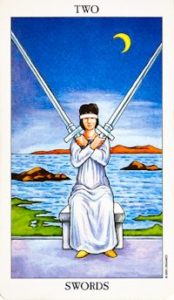 With Tarot readings, it's the same deal. You can do your own Tarot reading and get one set of Tarot cards. Then, you can go to a Tarot reader and get another reading, and another set of cards. You might even do a free Tarot reading online, or see another Tarot reader, and get even more versions. But, how do you know which is the right reading to listen to?

My advice is to choose just one Tarot reading and stick to it. It really doesn't matter which one you choose, because in the end, all will lead to the same outcome, particularly if you believe in destiny. You just have to choose one. Because the more you switch between readings, the more confused you become!

That said, you can still get value from the other Tarot readings. There may be a nugget of advice in one reading that you find particularly helpful or insightful. So take what you will, but commit to it rather than switching between the various readings as you progress.

There is, of course, a very easy option. Read the Tarot cards only ONCE.

Resist the temptation to read on a particular situation and then re-read and re-re-read and re-re-re-read!! Fight back the urge to keep asking the Tarot cards over and over again about the same situation, particularly when nothing has changed or progressed. I generally recommend reading ONCE on a question, then waiting at least a month or until something significant has changed before reading again. This will save you time, money and energy!

However, if, for whatever reason, you do find yourself with multiple Tarot readings on the same topic, do the following:

If you still find yourself reaching for those Tarot cards, get help. Seriously. In my opinion, it’s not healthy to keep asking the Tarot cards over and over about the same topic. This constitutes an addiction and treating an addiction needs professional help and attention.

What’s your advice for making sense of multiple Tarot readings on the same topic? How do you manage mixed messages from the Tarot cards? Please share your comments and ideas in the Comments section below.