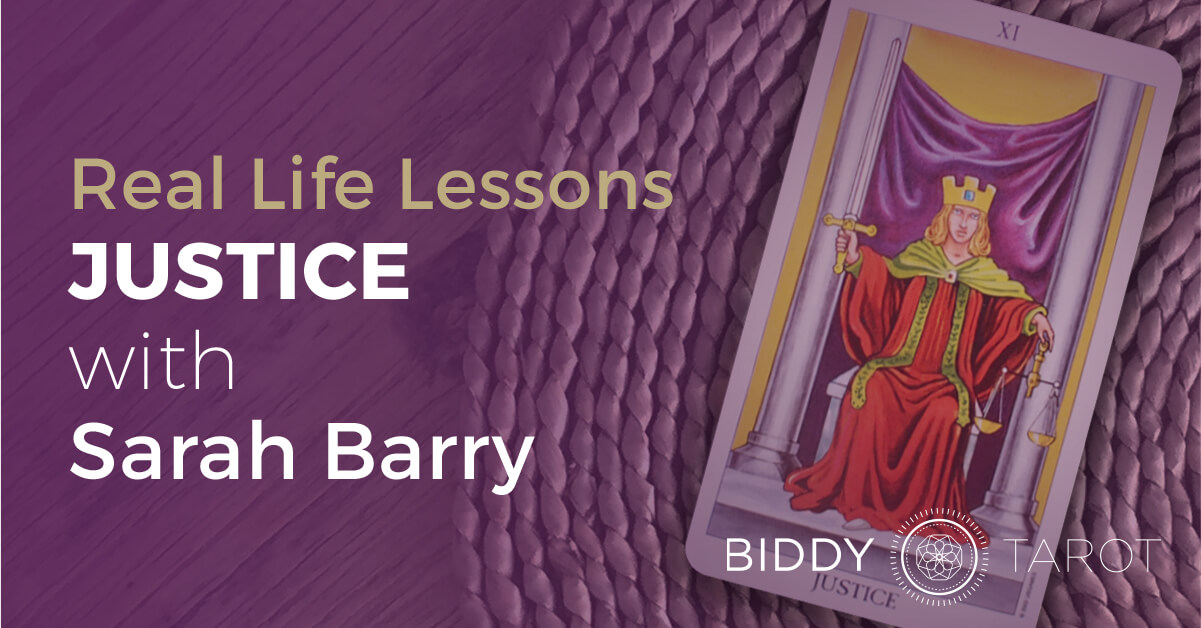 Sarah Barry, the great bicycling Taroista, shares the story of how she met the unlikely embodiment of our lady of Justice firsthand, and the wise lessons she taught her. Read on…. 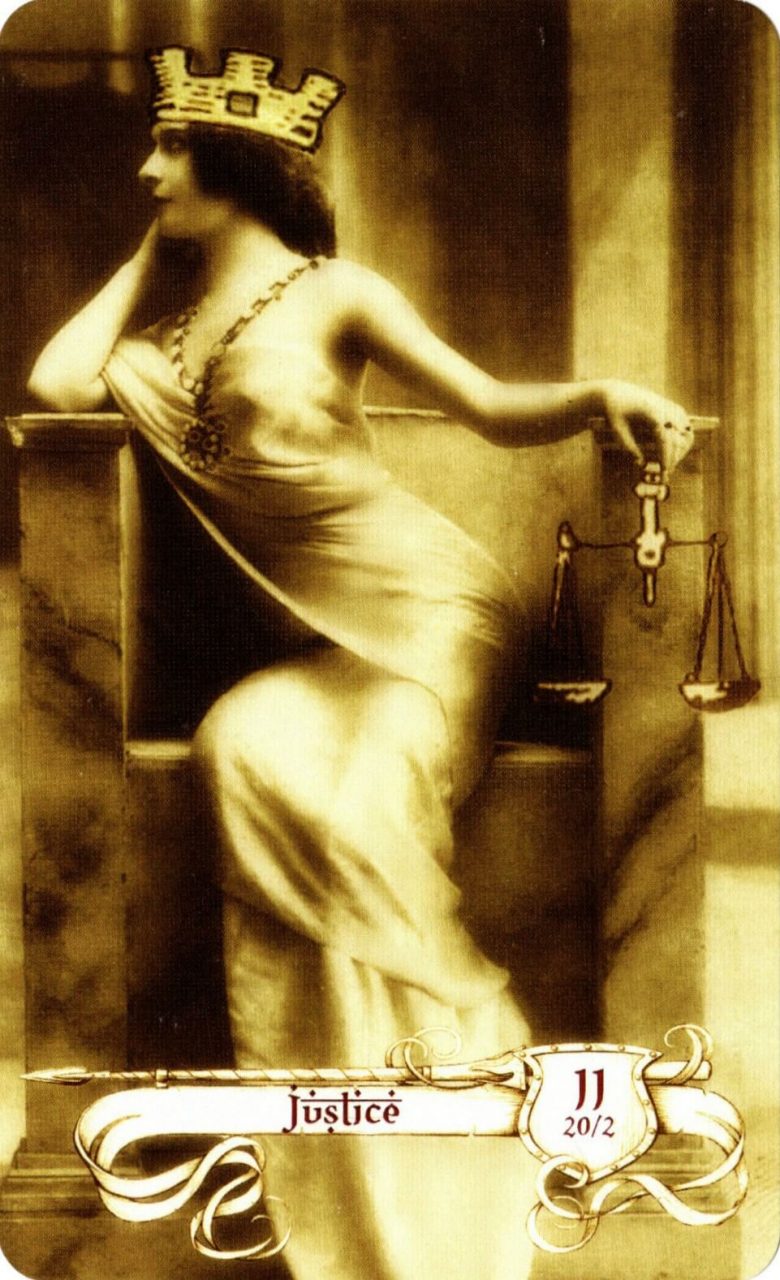 Getting to know Justice took me some time. I would see her standing there with her sword and scales, and wondered how the hell I could relate to someone so austere.

I remember how Justice first revealed herself to me in very a powerful way on an Autumnal day back in 2009, in the form of a homeless woman.

I used to ride my bicycle from the Inner West to Eastern Sydney on a weekly basis to volunteer at a hospice. On this commute I would often pass this woman in her various haunts around Darlinghurst. She broke the ice one day by yelling at me from across the street, “Hey! You read the tarot, don’t you?!”

I pedaled over and our conversations began. At the end of our first meeting she put three 50c coins in my bike basket. When I protested she waved her hand and said “Nah, what do I need it for?!”

After that day I would get off my bike wherever I saw her, and stop for a catch up. We talked about many things, from the tarot, to Anne Frank, to how she kept in shape (she would demonstrate how she could touch her toes) to why she always referred to herself by her full name rather than just her first name.

I once saw her walking up the street pausing and smiling at people who walked by, muttering “Welcome. Welcome.” Sharing that with a friend one day, she commented that it made sense that she would welcome people, seeing she lived on the street. We were all walking through her home every day.

On my Justice Education Day, I had laid my bicycle on the stone steps of an old gothic building on Cleveland Street, previously a church, and now owned by a local dominatrix. My friend was sitting with her back to the massive ornate door, telling me I should read The Magus (I still haven’t, but I bought it as a result of her instruction), and regaling me with poems by Omar Khayyam. All of a sudden there was a disruption behind me: a homeless man walked past shouting disparagingly, “do you think you’re f***king psychic?!” (my bicycle is covered in flowers and tarot cards and says ‘Tarot Readings with Psychic Sarah’ on it. So it’s kind of obvious to anyone who cares to look, what I do for a living).

My friend, suddenly assuming the mantle of Lady Justice, leapt up and started hurling verbal abuse at this man and told him to go move on. She wouldn’t stop until he moved. As he walked away, muttering “bloody psychics” under his breath, my friend turned to me, and with ferocity still in her voice she said, “Don’t take shit from anyone Sarah, don’t take shit from anyone.”

I was fascinated as I watched her leaping into action – it was such a sudden shift from serenely quoting the Rubáiyát to the fiery protection of our sacred space. I was learning that Justice is always at the ready. Justice can be cool, calm and collected, yet will be fierce and commanding if there is foolishness in the ranks.

Wide-eyed, I nodded, and took it all in, knowing that what she had told me was exactly what I needed to hear at that point in my life. From that day forward I started strengthening boundaries where I had previously allowed them to loosen out of timidity, and I broached subjects with people that I had needed to bring up for a long time, instead of suffocating through my silence.

I felt the power of the sword and scales of Justice, and I did my best to stay in balance, to look around me and inside of me to see what was really going on. I spoke of the things that came from my heart; the things that needed to be heard outside of my own body for a change, rather than keeping them internalised. On that day, my friend presented the Justice archetype in a strong and strident way, but that was because the situation demanded it. And the way she directly delivered her wisdom to me came from such a heartfelt space. She didn’t need to say anything to him or anything to me. But by choosing to act she helped me change the course of my life.

When I first gazed upon the Justice card in the Relative Tarot by Carrie Paris (carrieparis.com) another layer of understanding came through. Never before had I seen the Justice card as totally hot and sensual! Not only can we be clear and concise with what we perceive, we can be fully in our bodies as we do so. When we approach situations from an intellectual point of view alone, we can miss out on so much. When we feel our way and totally inhabit the body we are destined to stay in until our bones fall apart, there are so many more layers of experience to tap into.

I look at this Justice and am reminded of how powerful it is to be comfortable in one’s own skin, and what a radical act this can be in a society that tries to keep us easily placated by teaching us inherent self-discomfort. I imagine myself as this Justice card and I can feel the power that awakens when we aren’t shocked by difference, and instead seek common ground. When we look at what’s not working and seek to change it. A true Justice connection starts with trusting in our capacity to see things as they really are, aiming for perception that isn’t clouded by conditionings or twisted by corruption. Justice in the truest sense of the word. 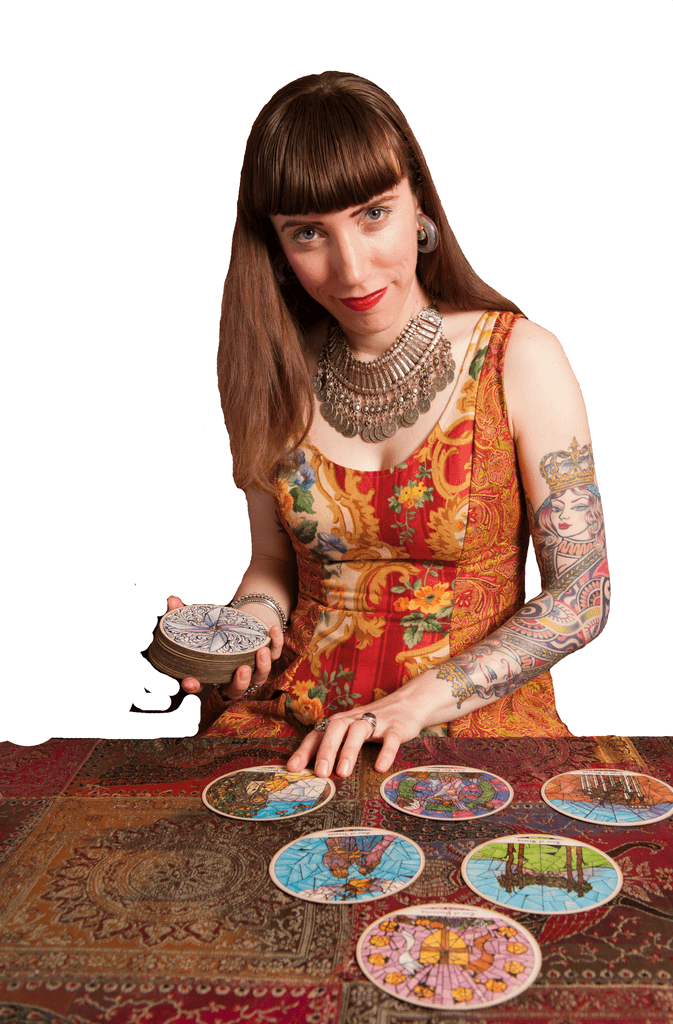 Sarah Barry (“Psychic Sarah”) has been a full-time tarot reader since 2003. She runs her business from her private tarot office in Newtown, Sydney, Australia where she does face-to-face readings, as well as readings via Skype and email. She feels fortunate to have the opportunity to sit with such a huge cross-section of society, and enjoys being a catalyst for transformation in her clients’ lives.

Outside of tarot she maintains a daily Vipassana meditation practice, writes, makes and sells chai tea, and rides a highly decorated flowery-tarot-art bicycle through the streets of Sydney.