The Fool with Robert M. Place 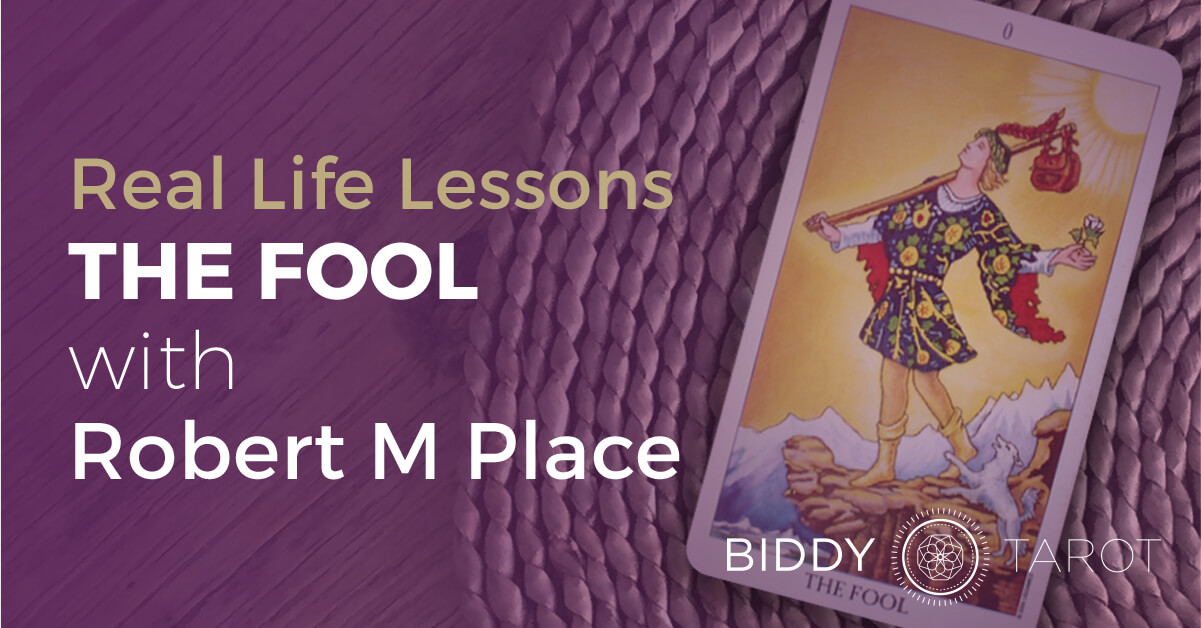 In this post, Tarot artist and history buff, Robert Place, brings the Fool to life by exploring its historical origins. 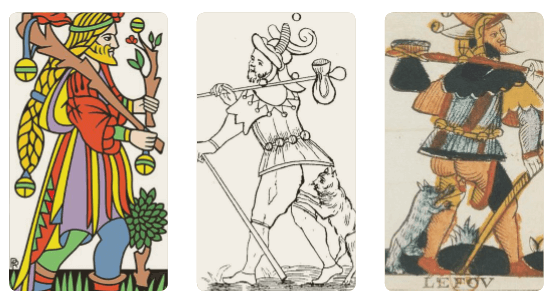 In traditional decks, the Fool is unnumbered because he is not one of the trumps but a wildcard that is outside of the series. He may be thought of as the Hero who takes the journey through the trumps—the Fool’s Journey. In the earliest hand-painted example, from the circa 1450 Visconti-Sforza Tarot, created for the ruling family of Milan, the Fool is an allegorical figure. The feathers in his hair represent folly, his tattered clothes poverty, and his goiter sickness. In some of these details, he is similar to Giotto’s symbol of foolishness found in his masterpiece, the series of frescos in the Arena Chapel in Padua, painted in 1305. In the printed Tarot of Ferrara, however, first created in the late 15th century, the Fool has become a performer, or possibly a carnival king, wearing a multicolored or motley tunic with bells and carrying two belled scepters.

In the French Tarot of Marseilles, the Fool is depicted as a “jongleur,” a Medieval French term that is the origin of the English words “jester” and “juggler.” In its original sense, it referred to a traveling performer who could be a jester, a juggler, an acrobat, or a musician. The Fool seems to be one of the jesting jongleurs. He is wearing a motley tunic, with bells on his collar and belt. He carries a pole over his shoulder with his belongings in a bag hanging on the end behind his back and a dog attacks him. In the earliest example, The Jean Noblet Tarot, the dog attacks his genitals, but, in The Jean Dodal, as in later French decks, the dog pulls down his paints and paws at his rump. The Marseilles Fool, like the jongleurs found in the 15th century engravings, is clearly from out of town, a stranger, whom dogs attack and who has not yet learned what to expect in a new environment.

The first occult interpretation is found in Court de Gébelin’s 1781 Monde Primitif.  It is clearly based on the Marseilles Fool except, in keeping with his Egyptian theory of origin, the dog was interpreted as a tiger. It seems that de Gébelin did not realize that tigers were not native to Egypt. In The Grand Etteilla, published in 1789, the Fool has become card number 78.  He is bearded vagabond wearing a blue tunic. He carries a traveling pack on a pole, and in keeping with de Gébelin’s suggestion, his dog has become an African leopard, who appears to be his companion. This transformation of the attack dog into a companion reached its completion in the 1909 Waite-Smith Tarot. This Fool is a gaily-attired vagabond approaching a precipice with confidence instead of fear.

In my Tarot of the Sevenfold Mystery, the Fool, like all of the cards in this deck, presents a bridge between 15th century Tarot images and the 20th century occult Tarot figures. The female figure, who is influenced by the Pre-Raphaelite drawings of Burne-Jones, represents folly or foolishness. In this respect, she is similar to the allegorical male figures found in the oldest hand-painted Tarots. She wears a blindfold, a Renaissance symbol for ignorance, but she peeks beneath it to avoid her superficial precipice. The dog, as in The Waite-Smith Tarot, is her friend and dances with her. She can represent the ignorance of the beginner, who is starting to gain experience, or the wisdom to act with spontaneity in spite of our experiences. 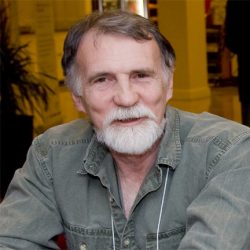 Robert M. Place is an internationally known visionary artist, whose award winning works, in painting, sculpture, and jewelry, have been displayed in galleries and museums in America, Europe, and Japan.  He is the designer, illustrator, and coauthor of The Alchemical Tarot and The Angels Tarot, which have received international acclaim.  He is designer, illustrator, and author of The Alchemical Tarot Renewed, the award winning The Tarot of the Saints, The Buddha Tarot, The Vampire Tarot, and The Tarot of the Sevenfold Mystery.  He is the author of The Tarot: History, Symbolism, and Divination, which Booklist has said, “may be the best book ever written on that deck of cards decorated with mysterious images called the tarot.” He is the author of Astrology and Divination, Magic and Alchemy, and Shamanism, written for the Mysteries, Legends, and Unexplained Phenomena series, and the author of Alchemy and the Tarot. He is the curator of The Fools' Journey and the author of the catalog for this exhibition of Tarot art that originated at the LA Craft and Folk Art Museum.  He was the guest of honor at the opening of the Tarot Museum in Riola, Italy. He has created numerous illustrations for books and magazines, his Facsimile Historic Italian Tarot is included in the collection of the Metropolitan Museum of Art, and he and his work have appeared on the BBC, A&E, the Discovery Channel and the Learning Channel. His newest work is a Lenormand oracle deck, The Burning Serpent Oracle, on which he collaborated with Tarot diva Rachel Pollack.