There are so many outstanding Oracle decks in the world. Energetically, I feel that Oracle cards hold a lot of ‘big’ energy. They give insight into the greater sense of what is going on. I recently came across the vibrant and beautiful deck that does exactly that: Cosmic Cards.

Today, I’m very excited to share with you an interview with Julie Catona, the creator and artist of the Cosmic Cards deck. In addition to kindly sending us a deck to play with and answering our questions, Julie is also offering all Biddy Tarot fans 5% off the Cosmic Cards deck with a special code!

1. At what point in your life did you first become interested in Tarot and/or Oracle decks?

I’ve always had a fascination with playing cards (card games/magic tricks) since I was a little child. I grew up being in communication with my angels, but never owned an Oracle or Tarot Card deck.  It wasn’t until a few years ago I purchased my 1st oracle card deck (Archangels) and was blown away by the artwork and positive messaging.

At first, I was hesitant that I may do a reading “wrong”, but was comforted immediately by my guides. Slowly and thoughtfully I began collecting Oracle decks whose artwork, theming & messaging resonated with me. It’s been a phenomenal journey and I’m forever in awe of the variations available and the magical community that has embraced me!

2. You’ve done a lot of creative work in marketing, which is fantastic!  But an Oracle deck seems like such a big shift from that. What made you say, “Okay, now I can do this”?

Thank you! That’s a terrific question- I would say that first and foremost I’m an Artist – in both my personal and professional lives. I’ve always enjoyed telling stories with my artwork, whether it be with charcoal, paint, sculpting, digital or animation. Outside of my work, astronomy and creating art are two outlets for me to articulate my own stories and visions. With the overwhelming urge to share [these creations], the thought of launching an Oracle deck really came as naturally as I could have hoped for. 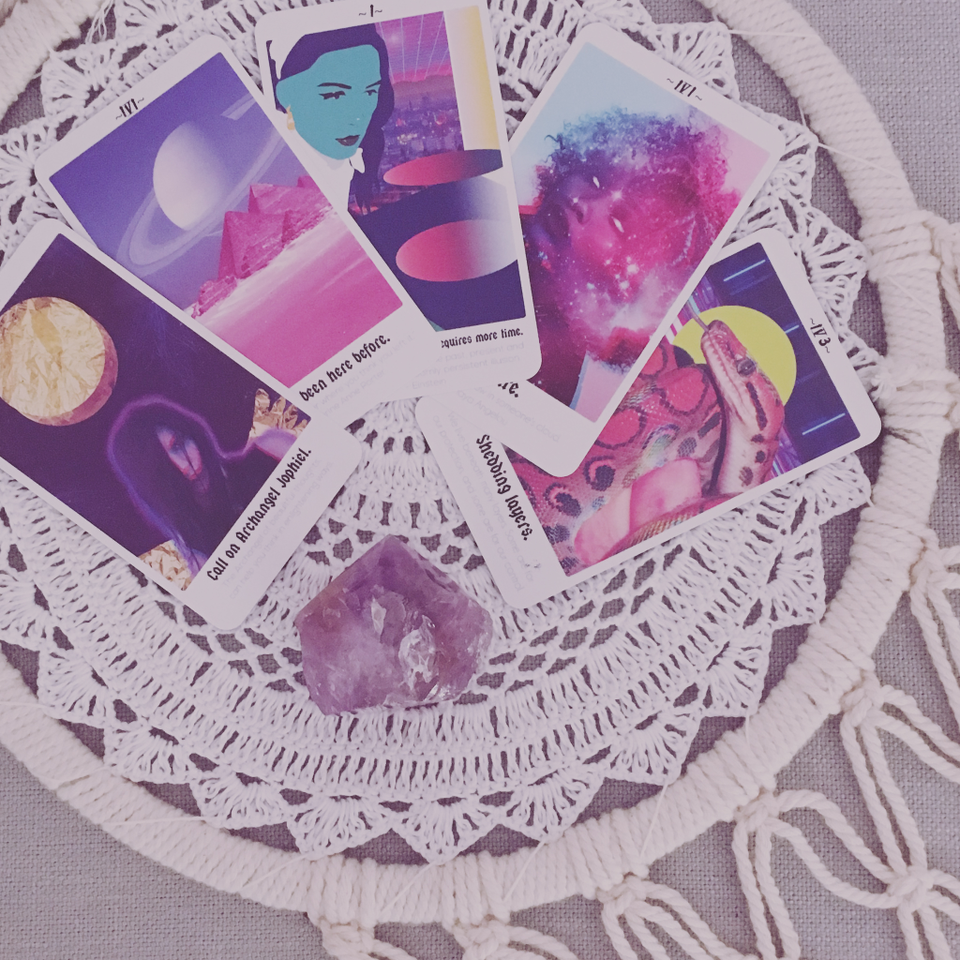 3. The Cosmic Cards and their corresponding text seem to be very intertwined. During your creative process, did you begin with the artwork or the text of each card?

I started with the artworks, many of which I had already laid out the story for in my mind. I really wanted the message on the cards to embody the vibrancy of the design. Putting a quote or message down on paper and making sure the marriage felt genuine was the natural next step. I would meditate on the synergy- sometimes being inspired to alter a design or start from scratch until it became a hybrid that had no beginning or end.

4. What was the biggest challenge in creating your Oracle deck?

Right from the inception, it’s been such an incredibly melodious journey. I really wanted Cosmic Cards to be able to stand on their own, individually. If you had only one card, I wanted the viewer to enjoy its composition and caption as though it was a personalized artwork.

Just like any artistic process, the tools and mediums can make all the difference. The biggest challenge was testing the actual print of the cards. How they felt in the hand, size, thickness- the tactile experience is as important to me as an oil painter would assess the quality/variation of oil pigments and canvases. I printed dozens of samples until I found the one that just felt right.

5. How do you hope that people will benefit from the Cosmic Cards?

My only desire for Cosmic Cards is that they be thought-provoking, fun and spiritually uplifting to anyone who views/uses them. Before I embarked on creating the cards, I asked myself, “Would I do it if nobody would see it? What if no one even wanted it? Even if I printed just 1 deck?” The answer remained: YES!

6. Cosmic Cards now has an expansion pack with 10 additional cards.  What made you decide to expand the deck?

This is my favorite part of the Cosmic Card deck! The 10-pack was birthed almost out of my control, with artworks & thoughts that I felt needed to be added. Just like our own Universe is expanding, I want this collection to offer growth.

Influenced by artistic and spiritual guidance, along with my intention to maintain relevancy, I will continue to add to the deck.

As an amateur astronomer, I want to keep incorporating images of celestial events that are happening in our “backyard” as well. I am also in the process of designing an augmented reality app that can be used in conjunction with the cards.

7. Which of the Cosmic Cards do you most resonate with personally and why?

One of my favorite artworks & the 2nd card of the Cosmic deck- “Rebirth” – depicts our divine ancestries witnessing the birth of our Sun.

I was inspired by the Zoe Skylar quote, “For a star to be born, there is one thing that must happen: a gaseous nebula must collapse. So collapse. Crumble. This is not your destruction. This is your birth”.

And [the birth of a star] is really not something that happens overnight. A star the size of our Sun requires about 50 million years to mature from the beginning of the collapse into adulthood.

We can keep in mind that during this literal phase of destruction, the dust and debris left behind are eventually recycled, providing the building blocks for a new generation of stars! If we want to be a star, we must endure this phase of transformation. Soon we will shine brighter than the light of a 1,000 Suns!

8. Where can people buy your Tarot deck?

Cosmic Cards are available for purchase via my website: www.futureillustrations.com/shop. Right now, you can save 5% on all purchases when you use the code BIDDY at checkout.