The Chariot with Benebell Wen 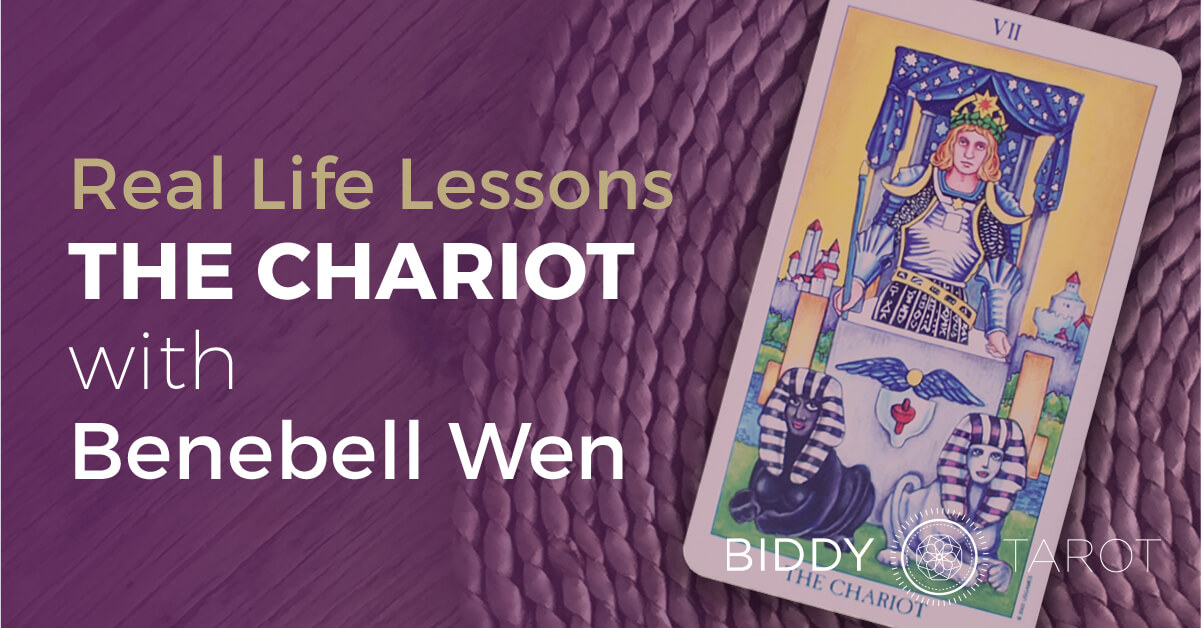 In this post, Benebell Wen, Tarot blogger and author of the Holistic Tarot, tells us the ties the Chariot card has to the Bible, Greek Mythology, and Numerology – and how she tapped into its power to ride to professional success. Read on… 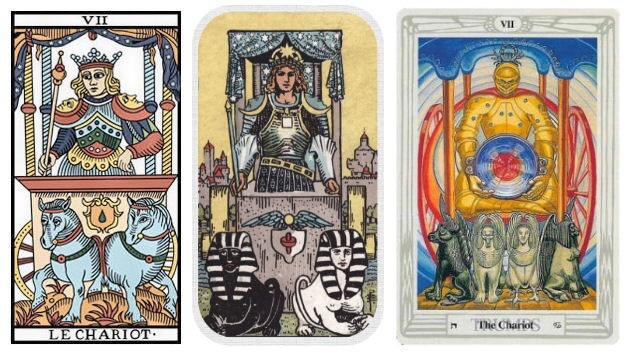 The Chariot, as expressed in the Tarot de Marseille, Rider-Waite-Smith, and Thoth

Key VII: The Chariot, Chariot Mysticism, and Finding My Path

Key VII: The Chariot is rooted in Merkabah or Chariot mysticism per Abrahamic mythos. It comes from Ezekiel 1 in the Holy Bible, which narrates the story of God appearing before the priest Ezekiel “in the land of the Chaldeans, by the river Chebar.” Historians believe Chebar to be in Mesopotamia, whereas Chaldea was a region in Babylonia between the 9th and 10th centuries.

As the story goes, Ezekiel sees Spirit as a fiery chariot amidst white light, glowing metal, and wheels of sparkling beryl. Before the helm of the chariot are four figures, each with the face of a lion, a bull, a man, and an eagle. A symbolic representation of these figures appears in The Chariot card of the Thoth Tarot. It also appears in the final card of the Major Arcana, Key XXI: The World, for all three of the traditional tarot systems—the Marseille, Rider-Waite-Smith, and the Thoth. The figures represent the four directions and four corners of the physical plane that the Chariot traverses. The lion, bull, man, and eagle also represent the four fixed zodiac signs in astrology—Leo, Taurus, Aquarius, and Scorpio, corresponding with the four elements, Fire, Earth, Air, and Water. Fixed signs in astrology are the signs of divine order. 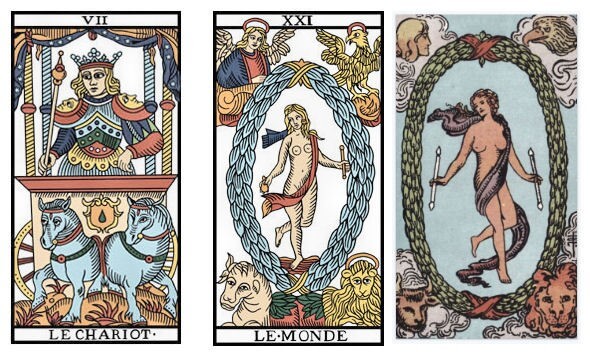 The semiotic relationship between The Chariot and The World

Per Biblical mythos, the Chariot is powered by seraphim, high-ranking angels in the celestial kingdom. Mystics ascend to the celestial realms by way of the Chariot. The numerological correspondence—tarot key number seven—denotes the seven heavens that mystics can project to. The concept of seven heavens can be found in Mesopotamian, Judeo-Christian, and early Eastern religions.

The second septenary, Keys VIII through XIV, represents the path to attaining wisdom, which involves coming to an understanding of all facets of the physical plane we dwell on. The third and final septenary, Keys XV through XXI, is apotheosis, transcendence toward the Divine. The final card in the Majors, Key XXI: The World, represents enlightenment, and having ascended to the throne of God.

In other words, The Chariot is the culminating point of self-discovery and self-knowledge, and that is the spiritual essence of the card. When The Chariot card appears in your reading, it is an affirming omen that you are on your way toward actualizing your most aspirational objectives. Recall that the chariot is powered by seraphim, and angels are divine messengers. Seraphim drive Key VII into your divinatory tarot reading, or the line of sight of your consciousness, to send a message, one that invites travel through mystic, metaphysical realms.

It was The Chariot card that pulled me back to the tarot and propelled me on the path to publishing a book on the subject. After college, I left my home in upstate New York and moved out to the west coast for law school. I hadn’t even brought a tarot deck with me. I left behind all semblances of spirituality. I abandoned religion and mysticism, dispelling any interest in notions of transcendence. I was perfectly happy to thrive in that first septenary.

One time while revisiting my childhood home back east, I took out my tarot deck just for fun and for the first time in years, did a reading for myself, and the pivotal card in that reading was The Chariot. Something about that reading motivated me to take the cards back with me to the west coast. From there, various personal milestones returned me to tarot study and beyond tarot for reengagement with the metaphysical (and paranormal). True to the prognostication of Key VII: The Chariot, I moved out of the first septenary and onward in my own quest toward Key XXI: The World.

I also identify with The Chariot card through my personal numerology. The Chariot is associated with Life Path 7, and I am a Life Path 7. The Count of St. Germain (1712—1784) noted that The Chariot card in tarot represented intellectual power and control of space-time. It portends one with the sovereignty of mind, and who therefore possesses the power to unlock the mysteries of life. These qualities of The Chariot are also the qualities wielded by Life Path 7s. 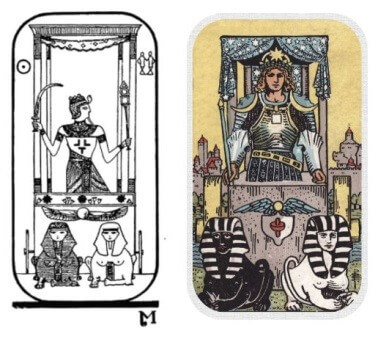 In the imagery and color symbolism of the Rider-Waite-Smith Chariot card, we can see the qualities of the god Helios, riding in his horse-drawn chariot of the sun. (Of note here is also St. Germain’s astrological correspondence of the sun with Key XVII.) When The Chariot card appears in reverse, I think of Phaethon (“the radiant one”), son of Helios. Phaethon was put in charge of his father’s chariot for a day and, losing control of the horses, ran the chariot into Earth, scorching it, so Zeus sent down a thunderbolt from heaven to destroy Phaethon and prevent further harm. That imagery reminds me of another tarot card, Key XVI: The Tower, bearing the thunderbolt of heaven striking down, destroying as a means of preventing further harm. Alongside Key VII, Key XVI: The Tower is also related to Life Path 7.

After Phaethon’s death, he became a constellation—Auriga, the charioteer. As it would be, in both the Marseille and Rider-Waite-Smith Chariot card, the charioteer’s crown and canopy are covered with stars. Even the charioteer’s armor bears a resemblance to the constellation Auriga. Upright or reverse, The Chariot card is about determination and willpower, though in reverse, recalling Phaethon, we are being warned of the consequence when there is determination without control. I find that the reversed Chariot appears in my readings when I reach a point in my life that requires greater control from me.

The Chariot card is a sign to the seeker to embark on the path of the seeker’s life purpose and higher calling. It is the Major Arcanum that steered me toward metaphysical study; it heralded the writing of Holistic Tarot, my first book, and thrust me on a diametrically different path from the one I was on before. 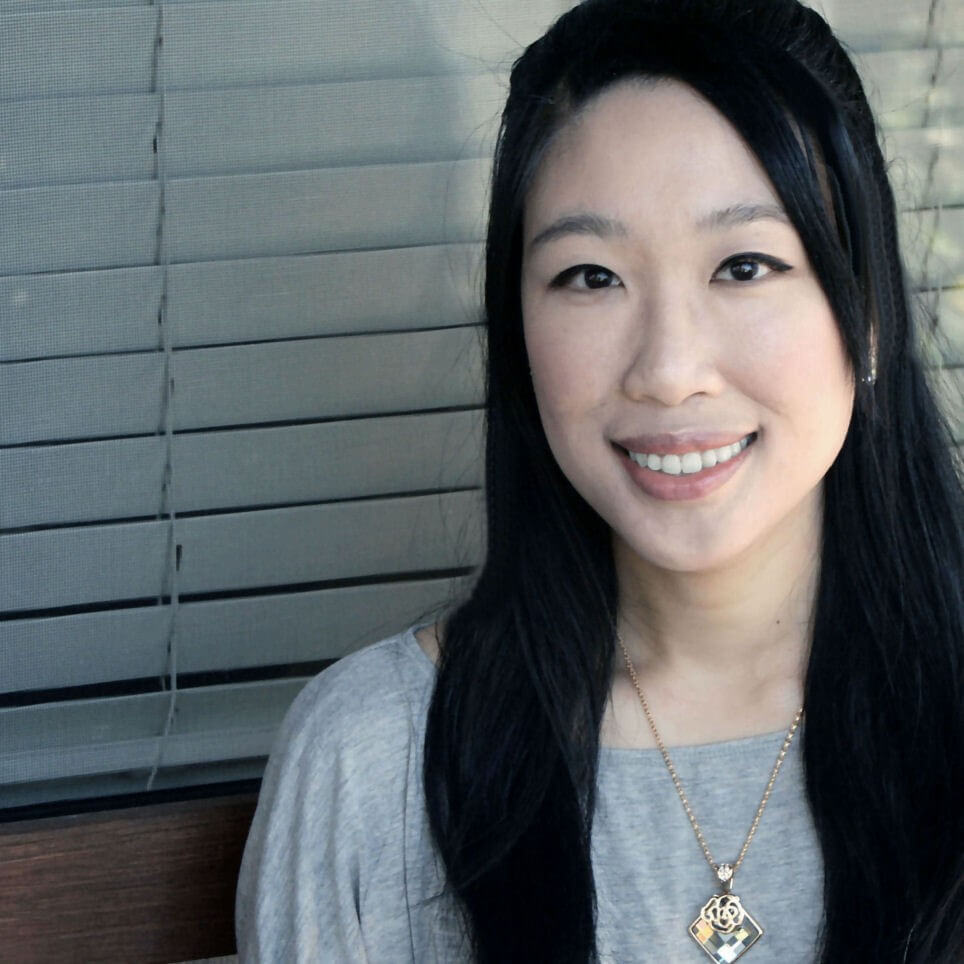 Benebell Wen is the author of Holistic Tarot and the forthcoming Tao of Craft. She is on the web at www.benebellwen.com and elsewhere via social media.